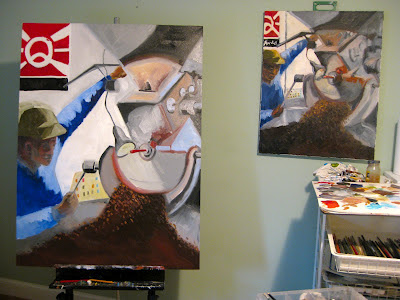 I'd painted Calvin releasing beans from the roaster onsite at the coffee plant. The canvas was pretty big, but not the size I'd been commissioned to paint. I couldn't bring the full 48 x 36 canvas into the plant, so I'm now painting the larger work using the earlier painting (hanging on the wall) as my source material.
This is a pretty new process for me -- creating new work from a painting -- and I'm finding it's simplifying the forms in the image and of course color choices are easier. The new painting is fully covered in paint, but there's a lot of adjusting to be done.
I was very happy with the smaller painting, but I think there are things that don't work as well in the larger size and there's a depth to the space in the smaller painting (maybe made entirely by the arc of the roaster top and vertical line that's not in the larger painting?) that I need to work on.
Posted by Judy Gilbert Levey at 1:27 PM No comments:

Large Painting - Pain in the Neck 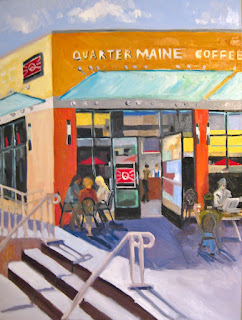 Many years ago when I first attempted to paint on a large canvas, I was reminded to adjust the easel up and down so I'd be painting at the same height instead of bending over or reaching up to get to the top and bottom of the canvas. Forgot all that today -- with the top of the canvas well above my head, I was reaching up to paint. Serious neck pain!
I took a break from this still-unfinished painting and went to weed the garden.... what was I thinking? It doesn't work to spend a lot of time bending over to make up for all that reaching up -- it just adds to the ways you can be reminded to stretch.
This piece is 48 x 36 and I'm working on it from a smaller sketch I did onsite a couple of weeks ago. The yellow banded reflection in the glass actually should say "Flippin' Pizza" in quite readable reverse type.. but I decided to edit that out. I do have more work to do on the (imaginary -- it's not there really) store name above the door and do some more thinking about how much or how little I want to define the people. I'm also sure that the shadow on the steps is the wrong color for the painting, so I'll play with that too before I get this done.
Posted by Judy Gilbert Levey at 3:44 PM No comments:

Finished (with one little fix I now see) 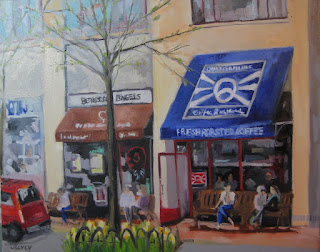 I have to watch how the paint dries -- the "D" in the Bethesda Bagels sign looks like an S and I'll have to put more opaque color around the letter to fix that. As the paint dries and I see if any of the other words need a touch up, I can do that.
For what it's worth, artistic license has been taken with the size of the Quartermaine's logo and awning. The awning is much bigger than the brown on next to it, but not quite so large as I decided to make it. The logo on the awning is also bigger, but in a busy street scene, the use of the size and intense color helps keep the focus on the coffee store.
Posted by Judy Gilbert Levey at 1:28 PM No comments:

Progress on the Bethesda Ave Painting 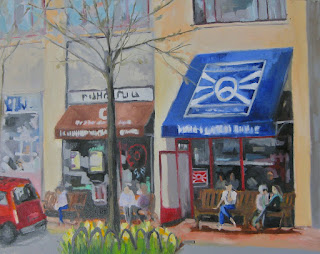 I'm close to finishing the commissioned painting of the Bethesda Avenue Quatermaine's Coffee store. I need to decide whether I'm going to paint the words on the signs in any more recognizable detail. I have a feeling that Quartermaine's might want that, but I'm not sure if the use of readable symbols -- letters, words -- will detract from the painting by making eyes focus on reading the words rather than feeling the painting. We'll see.
Posted by Judy Gilbert Levey at 9:14 AM No comments: 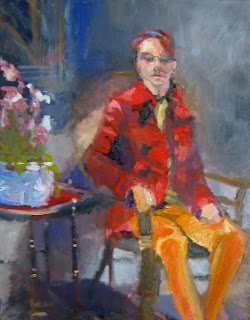 This is an updated paint-over of the work I did the first day with this model. Very happy to have hit the mark between too loose and too tight with this.
Outdoor painting starts in earnest now.
Posted by Judy Gilbert Levey at 8:36 AM No comments:

Painting in a friend's, um, shoes

I offered some comments to a friend (he asked! they weren't unsolicited) about recent woodsy/watery paintings he'd done that he felt weren't up to his usual work. His usual work is amazing, so I was reluctant to say anything, but I did have a few thoughts about what he could do, particularly with warm foreground and cooler distant color. And he was gracious enough to say he'd try to incorporate what I'd suggested. After I thought about it, though, I realized it had been a while since I'd been painting in the woods near water and maybe I needed to walk in his shoes or paint in his milieu or something like that.
It was a beautiful day, cherry blossom trees downtown were in full bloom, but not so full near my house. Still, a neighbor 2 blocks away has some spectacular landscaping, including a tree-lined stream (which is an actual stream... with a little help from a pump that keeps it flowing even when it would otherwise be dry), so I set up there.
I did get asked as I was pretty much done with the painting, "Are you painting the stream?" And I said "No." Which did result in the person who'd asked looking at me pensively, "You're not?" it looks like you are." I admitted I was just surprised she'd asked.
The image I posted isn't quite accurate in color or detail (the paint is too shiny for a good photo) but the irony, after all this, is that I think I made the distant center trees a little too warm yellow.
Posted by Judy Gilbert Levey at 1:55 PM No comments:

Painting a Horizontal Building in a Vertical Format

I sketched out an idea today to paint the horizontal building in a vertical format, including putting the company name where air conditioning vents actually are.
The canvas I was using had 2 slashes in it from some overzealous scraping of a previous painting, so this is really just a throw-away, a great way to work out ideas since there's no way anything can come of the work.
I'm going to move the company name down lower on the building and shift it so it's all visible (since it's not really there, it doesn't matter that you wouldn't see the whole company name when you can't see the full side of the building). It was breezy today and I couldn't start on the real thing, which will be on a large 36 x 48 canvas. I may have to work indoors on this one.
Posted by Judy Gilbert Levey at 12:56 PM No comments: 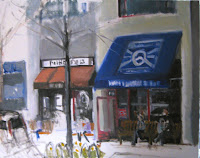 A sunny afternoon turned cloudy so I had to stop working on this exterior view of Quartermaine's Bethesda Avenue coffee shop. I was set up across the street in a small grassy patch in front of the Honda dealership, out of the path of passersby. The people in front of the store would come and go, park bikes, strollers, dogs... and then a couple of women sat down on the bench. They were having a very nice conversation and with my iffy vision I kept wondering if I was imagining it, or if it was my friend Joan and her friend Sherry.
It was -- they had no idea I was painting and especially that I was painting them. It was fun to realize that I couldn't have had better models if I planned it.
Color is going to be an issue with the painting, and I may have to project myself into spring a bit to bring out some of the warmer colors that will liven up the painting. Before the trees leaf out, a huge construction project is slated to begin just up the block and I'm not likely to be working on the painting once it starts. Also, the last time I painted at this spot, Bethesda Bagels next door had a bright red and yellow striped awning instead of their new and subdued brown. I miss that bright (garish!) color.
Posted by Judy Gilbert Levey at 1:19 PM No comments:

Studies of a Red Coat 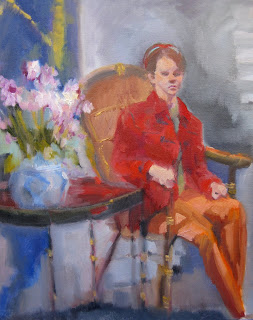 I started out with the very rough, high energy sketch of the model today, just to get the intensity of the red coat, orange pants, vivid flowers and her pose.
The rough sketch was a 30 minute quickie.
I followed that with the more refined, but still very loose, painting. We'll have this model, this pose, for two more sessions, which will be plenty of time to explore ways to approach this painting. 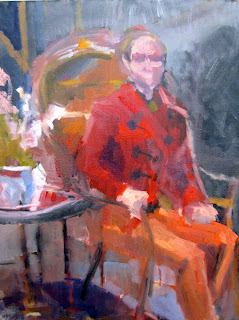 Posted by Judy Gilbert Levey at 9:54 AM No comments:

Focus on the body 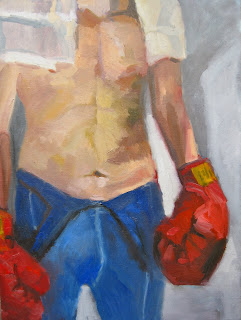 The boxer with the towel on his head was back -- and I decided it was time to throw in the towel... or at least stop focusing on it.
Posted by Judy Gilbert Levey at 8:13 AM No comments: 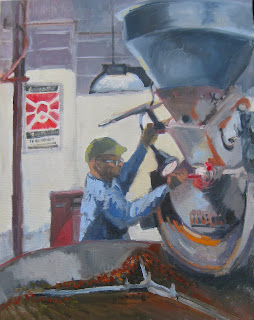 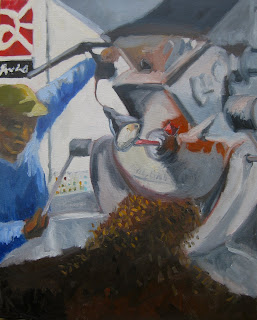 I had two paintings to do for the inside of the roasting plant. The left picture shows the testing of beans during the roasting process. The one on the right is the moment that the beans are released from the roaster for cooling. I have a little refinement to do, but not too much. Perhaps best of all, Calvin, my "model" who was hard at work while I was painting, was thrilled. From the earlier painting on the left, I updated the company's logo from its all-blue to a red & black version they are using now and made some color adjustments to the beans and the lighting of the roaster and brought Calvin closer to a likeness (including the glasses he puts on when he's looking at the beans).
Posted by Judy Gilbert Levey at 9:38 AM No comments:

Towel on the Boxer's Head 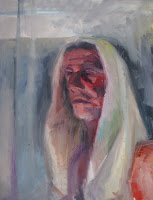 The towel was trouble. In fact, the whole painting was trouble, scraped completely three times before I got to this point. We have the boxer coming back on Wednesday, not sure if I'm going to just start something new.
Posted by Judy Gilbert Levey at 9:39 AM No comments: