Celebrating a return to the studio & Liesel 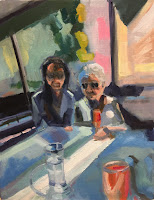 I am back in the studio after a month off having another knee replacement. I'm glad I only have two knees, two is enough!

Before the surgery, I was at the Tate Britain to see an exhibit of work by Frank Auerbach.  I was struck by how his work is characterized most by the painting and repainting of the same image on a canvas, sometimes layering the paint to inches of thickness, other times scraping and rescraping as the image he wanted emerges.  One result of the repainting is that the work doesn't appear to be overly worked, but each has the boldness and freshness of the last layer of paint applied.

Coming back to the studio, I'm really building up my stamina after the surgery and time off.  I thought I'd get back into painting by mixing up a full palette of paint (no wimpy dabs of color, big tube squeezes and mixes!) and using it to paint the moment at brunch when my family was celebrating the birth of new baby Liesel on a bright sunny day last spring.  The painting isn't done -- I do want to resolve some of the issues in it, but it feels good to be back painting.


Posted by Judy Gilbert Levey at 11:33 AM No comments: