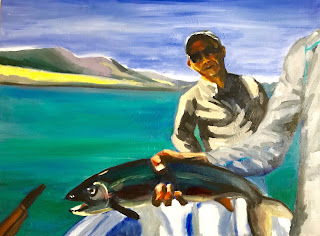 This is not only about the success of catching the fish, but also about finishing a painting I'd started months ago.   I hadn't painted any features into the shadow on the face, and I'd been thinking about how best to address the deep shadow cast by the baseball cap.

Yesterday I decided to work on this and I think I've got the face finished.  I also added the yellow sun-lit grasses to near and distant mountains.  The water may still have too much intensity as it goes into the distance and I'll tone that down ... and maybe it will be done.

The fish, by the way, is a rainbow trout.  We caught (and released) rainbow trout and cutthroat trout on the Yellowstone River last summer just a few weeks before the river was closed to fishing due to a concern about bacteria and warm water temperatures.  Today on NPR there was a report about how the native cutthroat trout are being weakened by breeding with the non-native rainbows.   Fishing is regulated, licensed, managed and monitored and it bodes well, I hope, for a plan for the future to protect the Yellowstone River and the native cutthroat trout.
Posted by Judy Gilbert Levey at 7:59 AM No comments:

When I was in Yellowstone in March, I had the amazing experience of seeing a herd of bison walking down a snow-packed path.  To be
on the safe side, literally, the group I was in on snowmobiles all got off and stood with the machines between us and the bison as they walked just a few feet away from us.  I took a lot of photos and brought the images into the studio to work on a painting of the bison walking.

This is just the beginning, where I'm trying to lay down the basic shapes and colors.  I may be adjusting the size and position of the bison in front to make him larger and darker, I have to work on that.

The white areas of the painting are just blank canvas showing through.  A lot more work to come.

Posted by Judy Gilbert Levey at 2:18 PM No comments: