I will be part of a two month group show in January - February 2012 at Har Shalom Congregation in Potomac, Md.

In June 2012, I will be part of a group show at the Ratner Museum in Bethesda, Md.

September 2012 will be my next solo show at the Foundry Gallery. BIG paintings are in my sights.

On an ongoing basis, I'll have work at the Foundry Gallery's group shows.
Posted by Judy Gilbert Levey at 1:01 PM No comments: 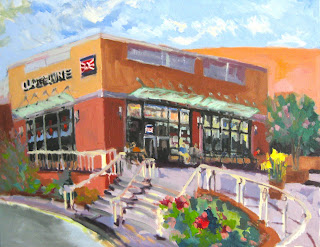 There's something unsettling about painting a coffee shop before you've had your morning coffee. I almost left the paint in the car and went in to get coffee, forget this painting stuff. But the weather was beautiful and the work had to get done. I added people sitting at the tables, juiced up colors, light and shadow. There's some refinement to be done (how sad that I painted the name of the store without the "m" and need to fix that up) and maybe the blue umbrellas will come and seem like a good thing to add... or not.
Posted by Judy Gilbert Levey at 7:43 AM 1 comment:

I learned two things while in Maine:

1. you can buy empty pizza boxes and transport wet paintings in them -- this is a wonderful thing;

2. if your car dies and you pop the hood, every grizzly bearded guy in the state will stop to give you a jump. And when the jump doesn't work, they will happily diagnose your problem, offer a ride, whatever you need. I think there's a reality tv show in there somewhere. Happily, for $35, the problem was solved by "Big Al" and I am eternally grateful.
Posted by Judy Gilbert Levey at 5:35 PM No comments: 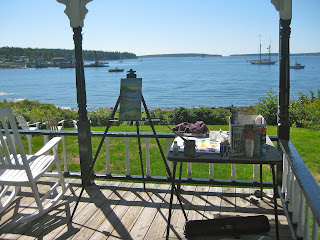 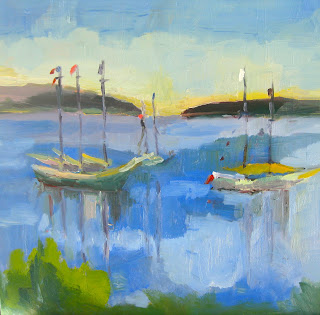 I can't describe -- so here's a photo -- how spectacular the porch is of the house I'm in. I had time to paint this morning on a sparkling day and there were five Windjammers anchored right off the beach. They departed while I was painting, but I tried to catch a few just before they left. After last week's workshop, I felt a need to loosen up some more (bigger brush).
Posted by Judy Gilbert Levey at 11:58 AM No comments: 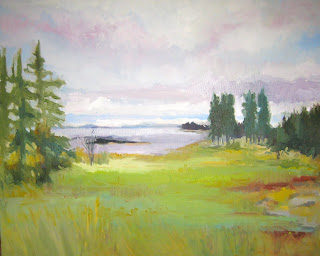 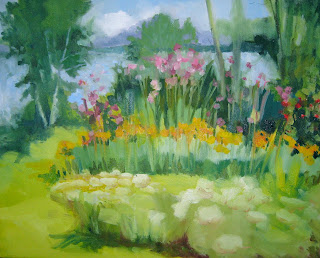 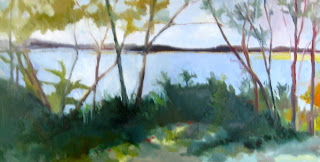 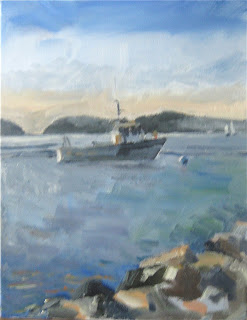 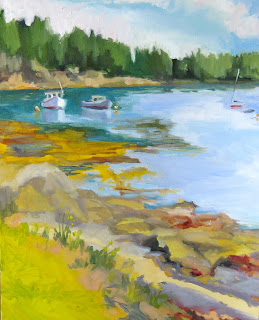 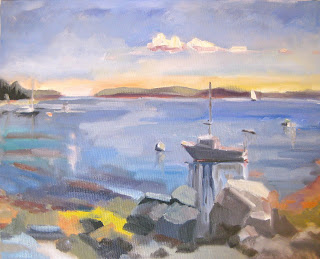 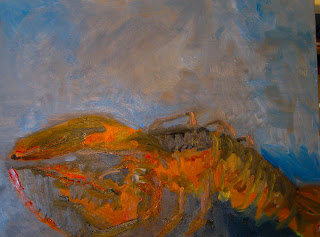 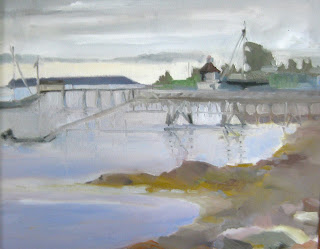 I had the amazing good fortune to paint this past week with artist/teacher Christine LaFuente -- christinelafuente.com -- in a workshop run by the Acadia Workshop Center.

Rossdhu Gate, before the rain 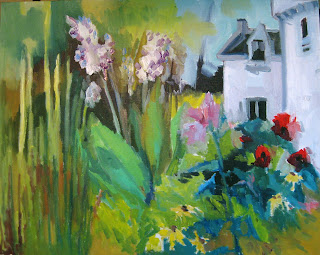 This is how far I got before the rain started this morning. Close, maybe close enough, to being done.
Posted by Judy Gilbert Levey at 8:27 AM 1 comment: 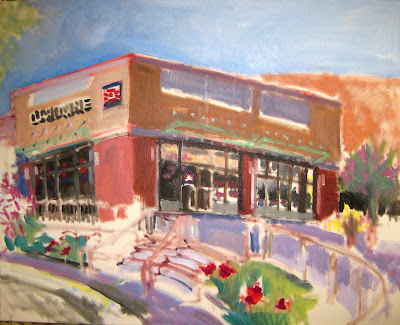 This painting is being done as a commission for Quatermaine's Coffee to use in a future marketing campaign. I've been waiting to start it in anticipation of blue umbrellas coming to the patio, but my time is short and the flowers are at peak state, so I got it underway this morning. The inclusion of the railing that curves along the patio is to add depth to the painting. I may be adding some people to the painting as it progresses.
Posted by Judy Gilbert Levey at 6:31 AM No comments: