I was recently in New York City and took photos of the fronts of old apartment buildings with fire escapes.  There must be plein air painters in New York City... but I've never seen anyone out on the narrow sidewalks, so I'm thinking a lot of what we see in art as city street scapes are painted from photo references.  That said, there's photo references and then there's projecting a photo onto a canvas, tracing the outlines of buildings and then painting from that.   I'm fine with people doing whatever works for them, but I personally draw the line at drawing lines from a traced projected photo.  It's just not my way.  I don't use projectors or rulers and I generally don't draw at all on a canvas before I paint.

Which could explain, in some measure, why a lot of photo-realist paintings look a lot more realistic than what I'm going for.  I'm less interested in reality than illusion.

I have been fooling around with the very complicated structures, iron work, looking-up perspective and light patterns on the building facades in this small painting.   It's coming along. 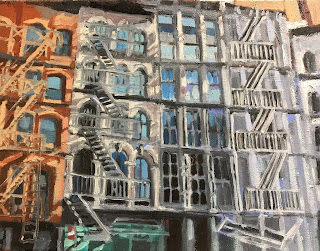 Posted by Judy Gilbert Levey at 12:11 PM No comments: