I will have a couple of pieces in the Foundry Gallery show during the month of February, and will be at the gallery on February 14th. There's a reception for the show on February 5th at 6 p.m. The gallery is at 1314 18th Street, N.W. in Washington, D.C.
I'll also be part of the Bethesda Painting Show at the Yellow Barn on February 27 - 28 at the Yellow Barn Gallery in Glen Echo, MD. All the paintings by the 20 artists in the show were painted en plein air in downtown Bethesda, MD.
In March, I'll be participating in the MCPAA (Montgomery County Plein Air Artists Assn.) exhibit at the Kensington Framing and Design Store in Kensington, MD.
My next solo show will be June 2011 at the Foundry Gallery.
And for those really planning ahead, in June 2012, I'll be part of a group exhibit at the Ratner Museum in Bethesda.
Posted by Judy Gilbert Levey at 8:27 AM No comments: 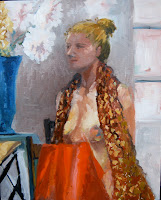 Made some changes today to change the emphasis in the painting. I scraped out her face and repainted it. That chance to scrape and repaint, change colors over and over, is a wonderful part of being an oil painter.
Posted by Judy Gilbert Levey at 8:49 AM No comments: 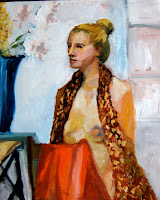 Here's a first study of the model this morning. I'm amazed at the range of color I'm getting from the very limited palette (3 reds, 2 yellows, 1 blue and white & black).
Posted by Judy Gilbert Levey at 9:40 AM No comments: 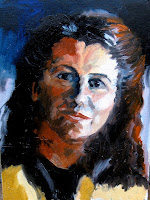 I'm playing with the palette that John Singer Sargent is said to have used. All warm colors, except prussian blue. The quick study has given me some ideas -- warm highlights in the hair, cool blue in the eyes -- but I'll be playing around with these colors for a while.
It's a huge shift for me -- the only color I usually use that's on this palette is naples yellow. Part of the reason is that it's largely a portrait palette, suited to people and indoor rooms/backgrounds. Also, some of the colors are more toxic/less stable than colors used today. Don't worry, I'm painting with gloves on.
Posted by Judy Gilbert Levey at 2:54 PM No comments:

I'm joining the Foundry Gallery in Washington, D.C. as of February 1, 2010 and will be showing work in the show Feb 1 - 28. Check out the gallery at foundrygallery.org.
Posted by Judy Gilbert Levey at 3:39 PM No comments:

Back to the Drawing Board In class today, the assignment was drawing. I don't draw much anymore and although I was satisfied with the drawing, it was nowhere near the fun of painting. I'm not averse to thinking about what lies beneath, but the color on top is what's going to make me happy and I'm looking forward to painting in the studio next week.
Posted by Judy Gilbert Levey at 9:07 AM No comments: 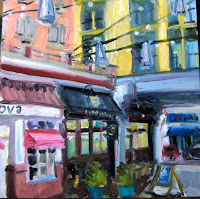 It seemed like a sunny, warm afternoon when I set out to improve on my supply of Bethesda paintings... but the weather became cloudy and cold in no time. And my "lively" spot in Bethesda Lane was pretty desolate.
The Yellow Barn Bethesda Painting Show will be Feb 27-28 at Glen Echo -- so there's still time. 18 artists, including Walt Bartman, will have work on display.
Posted by Judy Gilbert Levey at 10:53 AM No comments: 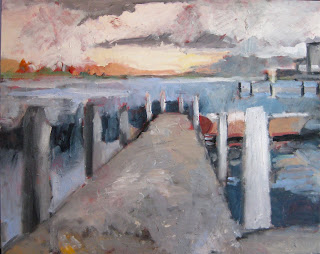 When I was in Captiva without my paints, I was on a dock while my kids were parasailing. I had about 45 minutes to study how the white-painted dock posts were darker than the water in places and how the water appeared darker than the posts. I wanted to capture that experience then -- such a simple and basic aspect of understanding how we see things -- but didn't have my paint. I took an old painting today and without anything but my memory (no photos, which is why I can't imagine what the masts/sails on the boat looked like), painted what I experienced. 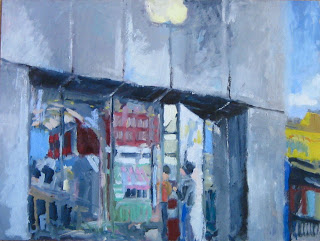 I also took a final stab at the Apple Store. I don't know if I got to the point where it fully describes that feeling of looking at a reflection and into a store at the same time, but it's all I can recall of the experience.
When it's warmer out, I am really looking forward to painting en plein air again. For now, though, these paintings are giving me a chance to try out ideas and work more in my head.
Posted by Judy Gilbert Levey at 11:41 AM No comments:

A Threat of Oil Paint & A New Palette

I planned to paint Captiva. I packed my easel, panels, a palette and just about a million dollars worth of oil paint in my checked luggage. Upon arrival at in Florida, no paint. I appreciate the airport screening and all that, but oil paint? In checked luggage? What was the point of taking it out and not putting it back in?
So -- with the prospect of replacing all that paint looming over me, I'm thinking about my palette again (trying not to think about the cost!). I've become very reliant on a Gamblin color bizarrely named "caucasian flesh tone" which is a nice warm peach, like naples yellow touched with rose. I rarely use it for faces, but it works well as a light in a mostly blue painting, the way that naples yellow shines a light in purple ones. Maybe it's time to get rid of it... or try to mix up some new approaches to color. Keep posted.
Posted by Judy Gilbert Levey at 12:40 PM No comments: